Arthur Samuel first came up with the phrase “Machine Learning”. He was IBM pioneer in the field of computer gaming and artificial intelligence.

Here is the short history of machine learning.

The theorem was discovered among the papers of the English mathematician Thomas Bayes and published posthumously in 1763.

A Markov chain or Markov process is a stochastic model describing a sequence of possible events in which the probability of each event depends only on the state attained in the previous event. It is named after the Russian mathematician Andrey Markov.

In 1935 Turing described an abstract computing machine consisting of a limitless memory and a scanner that moves back and forth through the memory, symbol by symbol, reading what it finds and writing further symbols.

The Turing test, originally called the imitation game by Alan Turing in 1950 is a test of a machine’s ability to exhibit intelligent behavior equivalent to humans.

The first artificial neural network was invented in 1957 by psychologist Frank Rosenblatt. Called Perceptron, it was intended to model how the human brain processes visual data and learned to recognize objects.

1964 Study of the Visual Cortex

Hubel and Wiesel in 1981 won the Nobel price for their findings on understanding of visual cortex back in 1964th paper.

They used micro-electrodes to monitor changes of a single neuron’s action potential based on visual stimuli and they were able to record electrical activity from individual neurons in the brains of cats.

They concluded that brain neurons are organized into local receptive fields. This was the inspiration for the new class of neural architectures with local shared weights.

The nearest neighbor algorithm was created, which is the start of basic pattern recognition. The algorithm was used to map routes.

Seppo Linnainmaa publishes the general method for automatic differentiation (AD) of discrete connected networks of nested differentiable functions. This corresponds to the modern version of backpropagation, but is not yet named as such.

In 1980, Fukushima published the neocognitron, first deep convolutional neural network (CNN) architecture. Fukushima proposed several supervised and unsupervised learning algorithms to train the parameters of a deep neocognitron such that it could learn internal representations of incoming data. He didn’t used backpropagation at time.

A program that learns to pronounce words the same way a baby does, is developed by Terry Sejnowski.

Yann LeCun 1989 was able to successfully use backpropagation to recognize the handwritten digit images. Later, he did the same for the ZIP codes.

Proven by George Cybenko in 1989 for sigmoid activation functions.

A team led by Yann LeCun releases the MNIST database, a dataset comprising a mix of handwritten digits from American Census Bureau employees and American high school students. The MNIST database has since become a benchmark for evaluating handwriting recognition.

Torch, a software library for machine learning, is first released.

The Netflix Prize competition is launched by Netflix. The aim of the competition was to use machine learning to beat Netflix’s own recommendation software’s accuracy in predicting a user’s rating for a film given their ratings for previous films by at least 10%.[40] The prize was won in 2009.

ImageNet is created. ImageNet is a large visual database envisioned by Fei-Fei Li from Stanford University, who realized that the best machine learning algorithms wouldn’t work well if the data didn’t reflect the real world.

Kaggle, a website that serves as a platform for machine learning competitions, is launched.

A deep convolutional neural network – AlexNet was introduced in the ImageNet Large Scale Visual Recognition Challenge (ILSVRC 2012 contest), where it set a precedent for the field of Deep Learning.

The Google Brain team, led by Andrew Ng and Jeff Dean, create a neural network that learns to recognize cats by watching unlabeled images taken from frames of YouTube videos.

Using Word2vec algorithm (Mikolov et al.) it was possible to learn the representation of words where each word has 50 or more latent features.

The major gain with this latent approach comparing to co-occurrence matrix approach is memory savings.

We are not forced to create co-occurrence matrices of NxN, where N is the number of distinct words, instead all we have to learn is the NxK matrix where K is usually 100 (from 50 till 1000).

Word2vec was capable of doing word arithmetics for the first time:

Facebook researchers publish their work on DeepFace, a system that uses neural networks that identifies faces with 97.35% accuracy. The results are an improvement of more than 27% over previous systems and rivals human performance.

Researchers from Google detail their work on Sibyl, a proprietary platform for massively parallel machine learning used internally by Google to make predictions about user behavior and provide recommendations.

Google’s AlphaGo program becomes the first Computer Go program to beat an unhandicapped professional human player using a combination of machine learning and tree search techniques. Later improved as AlphaGo Zero and then in 2017 generalized to Chess and more two-player games with AlphaZero.

AlphaFold, outperformed around 100 other teams in a biennial protein-structure prediction challenge called CASP, short for Critical Assessment of Structure Prediction. 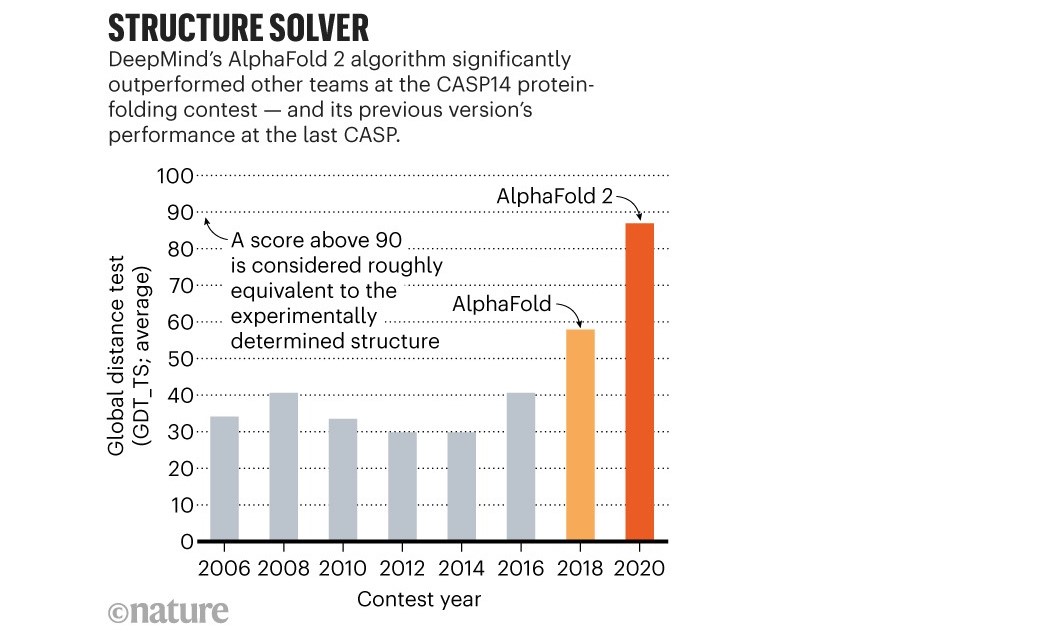