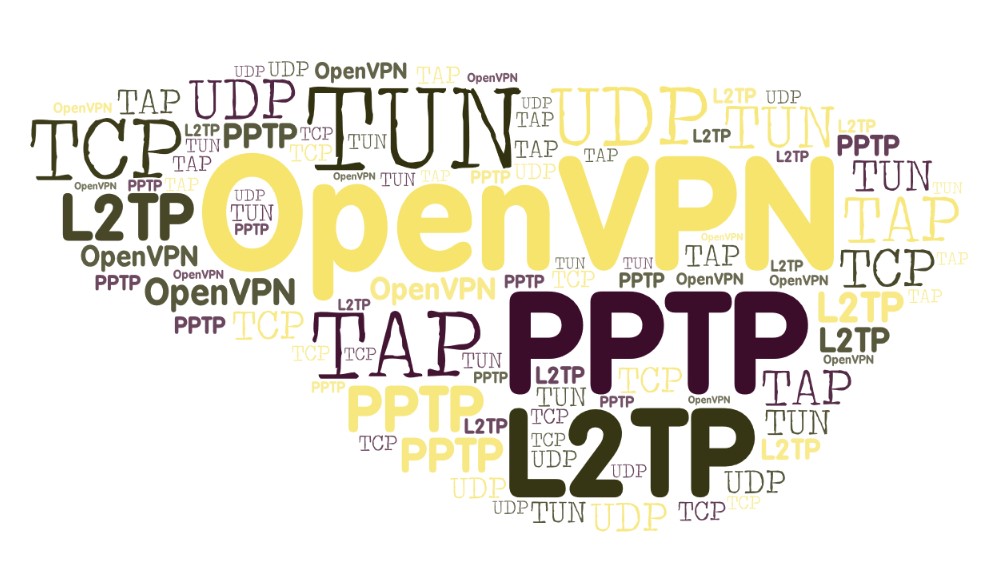 At first there was IP.

IP stands for Internet Protocol, and it is based on IP address. IP address is a unique string of numbers used to identify each individual computer (host).

IP delivers packets from the source host to the destination host based on the IP addresses it detects inside packet headers.

IP design is not secure since anyone can intercept the packet and read the data from it. This is why IPsec came out.

Turns out that OpenVPN is currently most popular VPN protocol that is open source. Since open source anyone can improve it.

When comparing with older VPN protocols OpenVPN brings much better security and simplicity. But there are always new protocols catching up such as WireGuard.

Before OpenVPN we had two major tunnelling protocols: PPTP and L2TP.

Both PPTP and L2TP use fixed ports which makes them easier to block by some firewalls using Deep Packet Inspection (DPI) techniques.

Layer 2 Tunneling Protocol (L2TP) is the result of a partnership between Cisco and Microsoft. L2TP runs on UDP. It encrypts data using 256-bit encryption key.

Since L2TP doesn’t have any encryption or authentication capabilities it is paired with IPSec and this brings to L2TP/IPsec.

IKEv2 is an extension of the IPsec protocol that supports iOS devices.

It can select protocol: UDP or TCP

Once you use OpenVPN you may select either UDP or TCP transport. UDP is the acronym for User Datagram Protocol and does not perform error correction. It is known as Fire and forget protocol. Because of that UDP is faster but less reliable than TCP.

TCP is the acronym for Transmission Control Protocol. It performs error correction but it demands creating connection, handshaking, synchronization etc.

OpenVPN can use different key size to encrypt data: 160 and 256 byte keys are common.

OpenVPN can create a tunnel (TUN) to connect two computers one in Japan and other in Brasil. You would just specify dev tun to make a tunnel inside a config file.

With TAP you will get a new segment say 10.10.x.y and all devices will get IP address from the new segment.

OpenVPN is based on client-server paradigm. It connects two parties together where one is a client and other is a server.

So there are: OpenVPN client and OpenVPN server know as peers. OpenVPN peers authenticate each other using:

Both peers have configuration files. Here are some well commented examples. 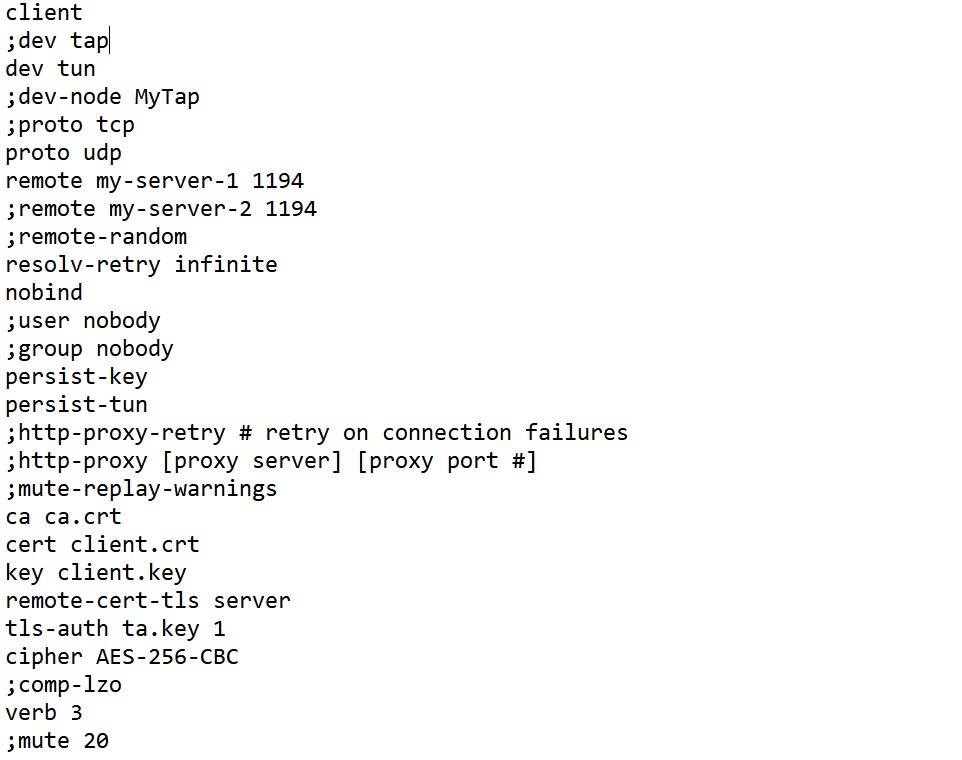 Typically there are multiple clients and one server. This is called multi-client server.

Each client need to have cert and key files (those with the extension .crt and .key).

Typical extension for the configuration file is .ovpn (what is in the image).

The task of the client is to pull certain config file directives from the server to authenticate.

This device is tunneling (dev tun). On client side, firewall for tun/tap device need to be disabled.

proto udp means OpenVPN will use UDP protocol. This must be the same in the server config file.

remote is the OpenVPN server name or IP address with teh addition of the port. You may select any port.

There may be multiple remote entries, for load balancing and remote-random would be the instruction to pick random one.

nobind is there to tell for the client not to bind to specific port to IP address, but to allocate a dynamic port for returning packets.

user nobody and same for the group nogroup would downgrade privileges.

persist-key and persist-tun would be to preserve some state across restarts.

Instructions with the proxy are if you connect through HTTP proxy to reach the OpenVPN server (not so common).

Now the sweet part, the certificates. Certificates may be injected inside the .ovpn file have. Or they can point to files.

client.crt and client.key are separate for each client, and ca.crt is the Certificate Authority (same for all clients).

remote-cert-tls server if one of five ways to protect from the man-in-the-middle attack.

comp-lzo is the compression algorithm that need to be enabled on server as well.

There are other client instructions that may be used, you would typically check them from the OpenVPN web site. 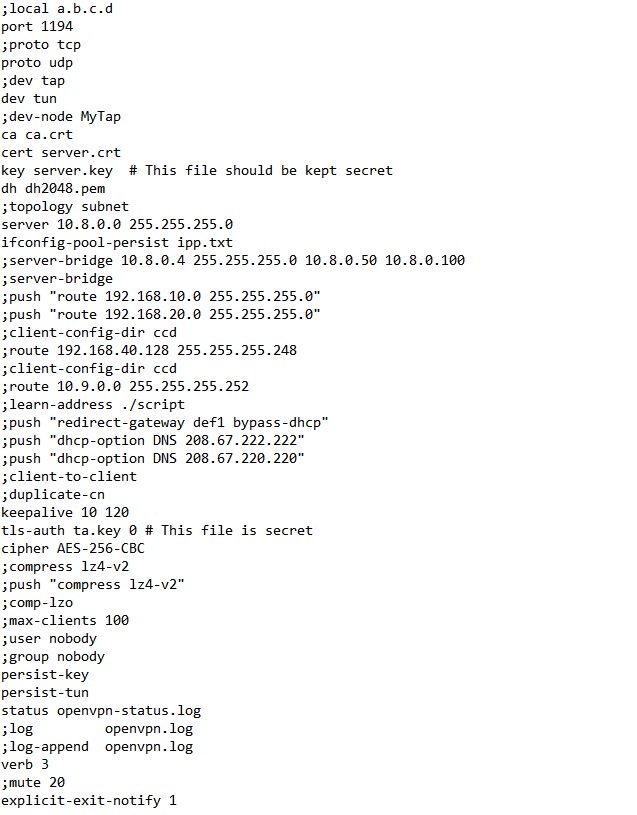 Picking the protocol and device need to be the same as on client: proto udp, dev tun.

Each client and the server must have their own cert and key file. The server and all clients will use the same ca file.

Network topology is by defaults subnet (topology subnet) rather than the older “net30”.

server-bridge is only important if you use TAP.

Push routes to the client to allow it to reach other private subnets behind the server using push directive.

If you set client-to-client on server different clients will be able to “see” each other.

Example: Man-in-the-middle attack and ways to prevent it

As described in on community site, you need to be aware of the possible Man-in-the-Middle attack.

If the clients do not verify the certificate of the server, some other client from the same subnet may act as a false server.

To avoid a possible Man-in-the-Middle attack where an authorized client tries to connect to another client by impersonating the server, you need to enforce server certificate verification on clients.

There are currently five different ways of accomplishing this:

Check the version of OpenVPN