How to achieve project isolation

Virtualenv – virtual environment allows you to work in an isolated version of Python.

Each virtual environment has its own version of Python.

Python virtual environments are configured through a configuration file called the site-packages folder.

Conda is similar to virtualenv and it is not limited to Python only.

Anaconda is a distribution of the Python and R programming languages for scientific computing that uses conda.

Jupyter Notebook (acronym of three languages — Julia, Python and R) is an interactive web application from which you can run commands. The main achievement here would be to select a specific conda environment from where you will run Jupyter Notebook.

Although the task looks small it is very important from the Project isolation perspective.

Use pip to install a package by name. pip looks for the package in PyPI to calculate dependencies, and installs them.

It is always a good idea to upgrade pip to the latest version.

Check the version of the pip:

Don’t run python pip directly. This will not work. pip is not a command line argument python understands.

pip works from python as a main module so use the -m switch. This would work:

but even better and more simpler would be:

which assumes a -m switch.

The important difference between these two:

pip installs Python only packages while conda installs packages written in any language.

to get the feedback on the conda environment that is running.

Python environment is a directory that contains a copy of everything Python needs to run including:

Creating a New Environment in Conda

First if you open the anaconda command prompt you may find something like this:

In here the “(base)” corresponds to the base environment which is by default. The “C:\Users\dj” is the current user folder.

From there you can just activate the environment with: 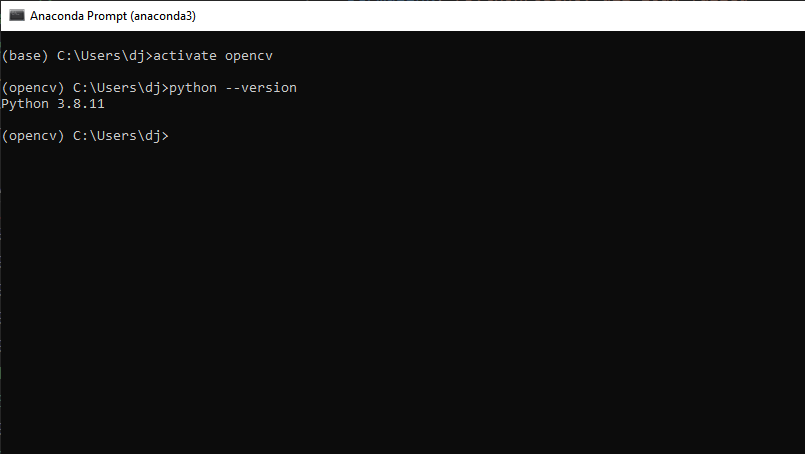 This will lead to the new prompt:

To return to base:

It is possible to set Python version when creating the conda environment:

Once you create conda environment you can alter the version of Python:

This will remove the old and set the new Python 3.6 version inside the environment.

Use Conda Environment from Jupyter

Let’s also make this Python environment visible from the Jupyter notebook so we can use it anytime.

There are a couple of steps to add a new Conda environment to your Jupyter notebook.

For the environment to become a kernel install ipkernel:

Register the kernel spec with Jupyter: