In here I will ask and answer many questions from statistics.

In statistics regression is an approach to find the relationship between variables and use that for prediction.

There is information if $P(x)<1$ (probability of the occurrence is less than 1).

This is why Shannon defined: Information quantifies the uncertainty in one single event.

The more we are uncertain of the more information.

In a fair coin toss game probability for the coin head is 0.5. Let’s calculate the information.

For the rolling dice problem the probability we get 1, is $\frac 16$.

The information we will get 1 will then be:

This tells us the information in bits.

Let’s consider a simple 9 balls bin: {2 red, 3 green, 4 blue}. You pick one ball at random. What is the expected amount of information you will receive with a single pick?

We can say ball picking is random variable $X$.

A random variable is a variable whose possible values have an associated probability distribution and sample space from where the values are taken.

We need the entropy $E[X]$ of this random variable.

Don’t confuse entropy of a random variable with the expected value of the random value $\mathbb E[X]$.

Entropy is weighted sum of all the information, where the weights are the corresponding probabilities.

Information entropy is typically measured in bits (or “shannons”) corresponding to base 2 in the above equation.

If we use $log_e$ these will be natural units or nats.

Instead of writing $E[X]$ for the entropy of $X$ more frequent notation is to use $H[X]$.

How to maximize the entropy?

For the case with 9 balls and 3 different colors we should have 3 balls of each color: 3 red, 3 green, and 3 blue balls.

The results is equal to $log₂3$

Entropy will be maximized if uncertainty of any element is maximized.

12 balls in a bin entropy

Case when we have 12 balls in a bin, equal number of the same colors.

We may note entropy will increase if there are more color groups.

Cross-entropy measures the relative entropy between two probability distributions L1 and L2 over the same set of events.

The results is equal to $log₂3$

In machine learning we use cross-entropy as a loss function. How this works?

Now our aim is to maximize the cross-entropy in this case.

Probability of an Event

We use $P(E)$ to express probability associated with an event $E$.

For instance flipping a coin. $E1$ is the first flip, $E2$ is the second flip. If the outcome of the event $E1$ is either head or tail this doesn’t have impact to the second flip outcome $E2$.

We could rewrite the dependent form as:

What is probability of both heads in two consecutive flips if at least one flip is head?

However, now we have:

To calculate the $P(M)$ we use the replace rule:

Then we use Bayesian rule:

We can use the Bayesian formula:

Bayesian filtering can predict if a message is spam based on the words given.

It works based on the fact that some words have a higher chance of appearing in spam messages than in normal ones.

Inside scikit-learn python package there is a BernoulliNB model that implements the Naive Bayes algorithm.

Let we use $S$ for message is spam. Let $V$ is the event when email contains the word viagra.

Then Bayes’s theorem tells us that the probability that the message is spam conditional on containing the word viagra is:

Denominator meaning: probability that a message contains viagra or $P(V)$ written in another form.

This calculation is simply representing the proportion of viagra messages that are spam.

This then lead to the following conclusion:

Problem of the Naive Bayes model

The Naive Bayes is having a constraint. Words inside email $w_1, w_2, … ,w_n$ are independent of one another. There is only a conditional on a message being spam or not. This may explain why there are better approaches for filtering spam.

The Law of Large Numbers (LLN)

Then you may note the average of the observed values in the long run will be closer to the expected value.

We can reach that number with large number of observations. This is LLN.

The Central Limit Theorem say for any distribution if we take multiple samples of equal size, sample means will have the normal distribution as long as the sample size is greater than 30 samples.

Given a sufficiently large sample size, the sampling distribution of the mean for a variable will approximate a normal distribution regardless of that variable’s distribution in the population.

What is SE (Standard Error)?

The Standard Error (SE) considers taking multiple n-samples from probability distribution, and recording of the means obtained in repeat. For Gauss or normal distribution it should be: $\Large \frac {\sigma }{\sqrt {n}}$

where: $\Large σ$ is the standard deviation of the population, $\Large n$ is number of observations of the sample.

What is called erf in statistics (math)?

This is a Gauss error function connected to Gauss or normal distribution.

In Python you can find it under math.erf. The property of this function it goes from -1, to 1. The function has no singularities except at negative infinity and positive infinity. You can define it as: 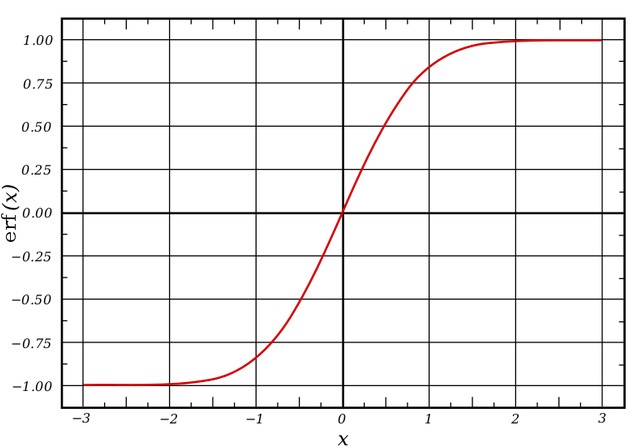 Draw normal PDF. What is below the curve? 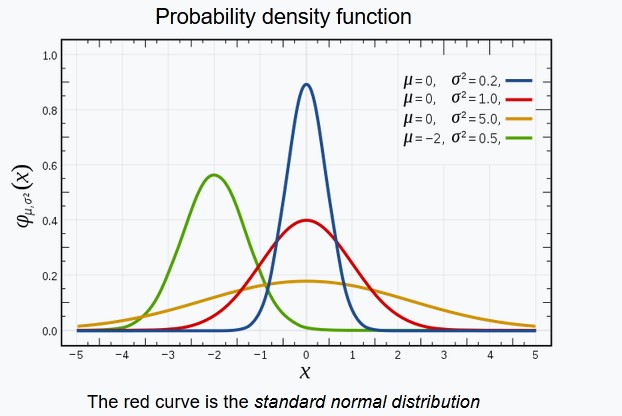 The total area under the curve for any PDF (Probability Distribution Function), not just for normal is equal to 1. This curve represents the random variable distribution.

Draw normal CDF, what is below the curve? 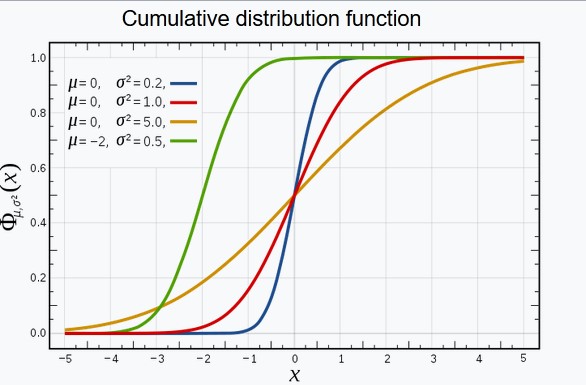 What is characteristic function?

What is hypothesis testing?

A hypothesis test is a formal approach for evaluating a research question.

We analyze the data to evaluate if hypothesis is true. For instance, whether man or women are promoted more often.

Null hypothesis would be, gender do not influence promotion recommendation. In this case we should evidence gender rates are about the same.

T-test is any statistical hypothesis test in which the test statistic follows Student’s t-distribution under the null hypothesis.

A t-test is most commonly applied when the test statistic would follow a normal distribution.

What is power (statistics)?

The power of a binary hypothesis test is the probability that the test rejects the null hypothesis when a specific alternative hypothesis is true.

p-hacking (fishing, snooping) is the misuse of data analysis to find patterns in data that can be presented as statistically significant, thus dramatically increasing and understating the risk of false positives.

False positive is a test result which wrongly indicates that a particular condition or attribute is present.

The process of p-hacking assumes investigating the p-value. p-hacking is common belief that p-value has huge impact on validity of the experiments. The problem is this seams not to be always true.

A p-value less than 0.05 is statistically significant.

It indicates strong evidence against the null hypothesis.

If p-value < 0.05 We may reject the null hypothesis, and accept the alternative hypothesis.

This is a special online book with many topics about statistics and direct link to YouTube videos.