This article explains Swift String type. You can experiment and test this code on swiftplayground. All experiments are doable in Swift 5 and later. 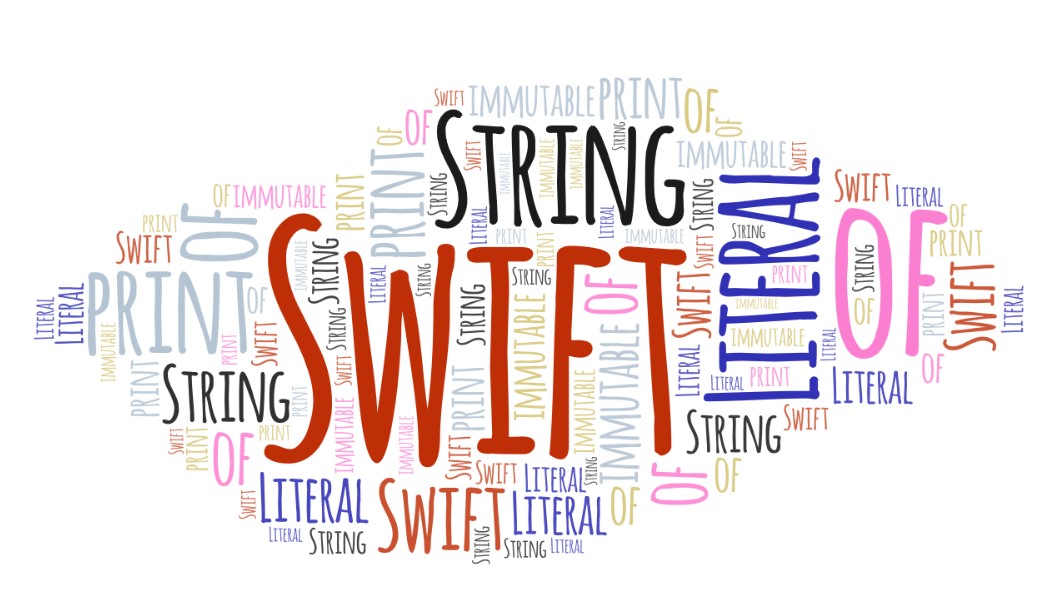 The String literal in Swift is text within a pair of double quotes.

In some programming languages you can use single quotes to create a string literal. This is still not possible in Swift.

Once you have a string literal, it needs to be assigned to a constant or to a variable. If you don’t assign, the compiler will ignore the string literal.

Don’t forget that Swift is very opinionated and requires named parameter of: when getting the type.

This will not work:

In our case we assigned string literal to a variable str.

Similarly we could assign a string literal to a constant, but then we could not append the constant.

If you try to append a value to a String constant you will get the error:

The following special characters can be used to append to a String variable.

Double quotation mark helps writing a double quote inside a string literal without closing the literal.

Frequently you concatenate a newline to a string literal as follows:

Concatenation works only for the String type. It is why we need String interpolation if we plan to add some other literal type such as Int.

The syntax for string interpolation is a backslash followed by a set of parentheses – \().

Anything inserted inside the parentheses are interpolated into the existing string literal.

The length of a String

We already mentioned the count property.

Swift 2 and Swift 3 would use str.characters.count. Swift 1 used the global method count(str)

Split a string into an array

Split a string by single delimiter

One another consideration is needed. What if we have multiple white spaces and we would like to split with the white space as separator?

Usually we ignore the white spaces, but there is an optional parameter omittingEmptySubsequences. If we set that to false the returned array will have empty space elements.

By default, omittingEmptySubsequences is set to true.

To split by multiple delimiters we will use components, from the Foundation framework:

We used import Foundation, because it contains the CharacterSet class.

Code will break the line: We program in Swift! and we will get two parts:

String split by word when word is just a single character is also a valid option.

Join the string from array of strings (characters)

For this job in Swift you may use joined method from Swift Standard Library.

There is one interesting case to convert an array of characters to a string:

For this purpose, joined method is not needed.

In Swift 4 and later, there is reversed collections method.

Check if string contains the substring

One very useful thing operation in Swift would be to check if a substring is part of a string. For that Swift has the contains method.